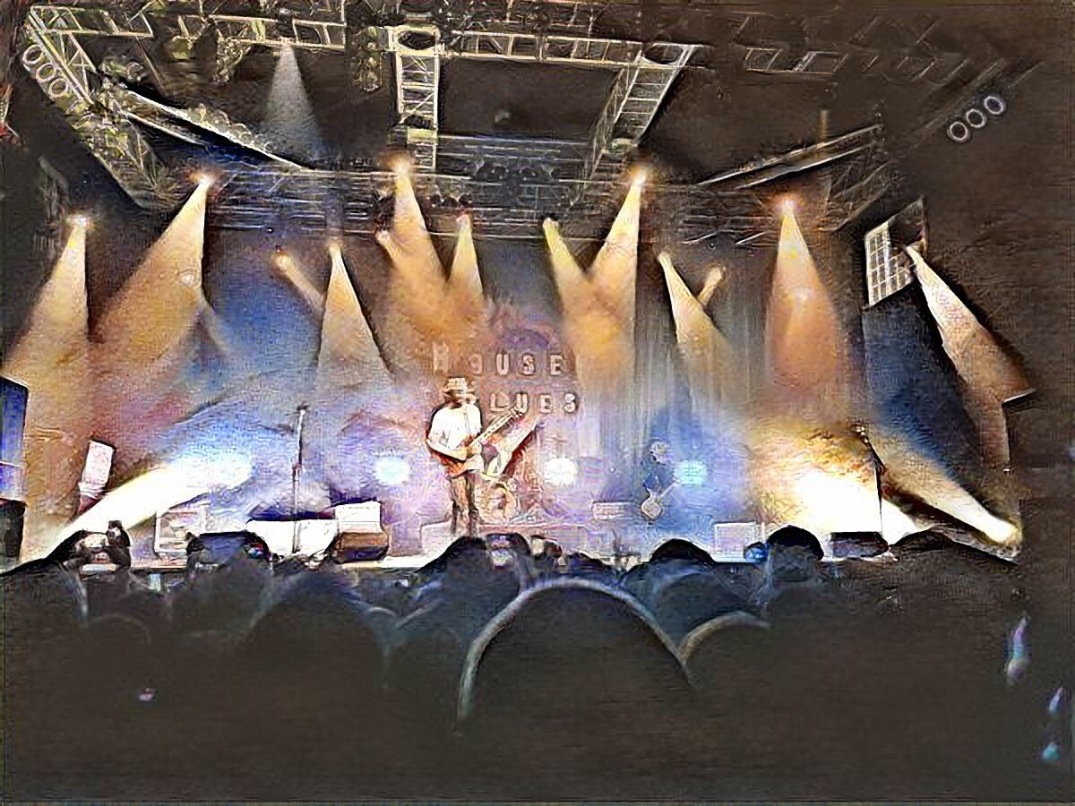 Since the beginning of the 20th Century, every music generation has had their blues heroes, innovators and saviors.  For the current generation of musicians that have been searching and starving for that next true bluesman, Gary Clark Jr. has staked his claim to this lofty perch.  Now, this isn’t exactly breaking news at this point of his continually blossoming career.  Some version of this statement has been said, written, and celebrated countless times before.  So, why say it again?  Well, one cannot fully grasp the absolute truth of that lofty statement until they’ve seen this man live and in person, and on a perfect Saturday evening in Central Florida, the proof was in the pudding…or rather, his viciously raw and dirty, yet smooth and crystalline texture of a guitar tone that knows no bounds.

Playing thru a surprisingly simple pedal chain (a TC Electronic PolyTune, Fulltone Octafuzz, Zendrive for clean boost, Flint Strymon for cleaner reverb and tremolo control and a customized Dunlop Crybaby Wah), he runs this into 2 Fender Vibro King Amps.  One of which was given to him by Fender and the other, purchased from Pete Townsend while on tour in Europe.  NBD, right?

Regularly cycling thru a series of four guitars (an Epiphone Casino Custom, a Fano JM6, a Fender Custom Shop 1963 Strat and a 1961 Gibson Les Paul/SG Standard), he ranges from heavy and unhinged to nearly glasslike tones depending on which guitar the song calls for.  However, it’s his ’61 Gibson that steals the show every damn time it comes out.  A gift from the Foo Fighters after recording “What Do I Do/God As My Witness” for the Sonic Highways documentary/album (again, NBD…), the combination of his rig setup with the humbucker pickups in this piece of guitar art (his only guitar with humbuckers) make for an absolutely raw, nasty and HUGE tone that just devastates.

As the lights went down in an absolutely jam-packed House of Blues, the opening trio of “Bright Lights”, “Ain’t Messin’ Around” and an otherworldly guitar solo in “When My Train Pulls In” just set the tone in a way that only this band can.  Where their sound is most definitely firmly rooted in the blues, “Bright Lights” hits hard with its Hip-Hop styled rhythms, “Ain’t Messin’ Around” takes on more of a Curtis Mayfield-meets-Sly and The Family Stone vibe and “When My Train Pulls In” is just pure, heavy, psychedelic blues as only Gary Clark Jr. can do.  This is precisely why he is poised to continue to carry the torch for this current generation of blues musicians.  This band isn’t just playing 12-bar blues.  They’re innovating how blues music is structured, without losing the feel of what blues music is.  As much as this has to do with Gary Clark Jr. himself, it’s his band that brings it all together.

The no-frills, all groove rhythm section of Johnny Bradley (bass) and Johnny Radelat (drums) keep everything firmly in the pocket, allowing Clark’s virtuosity to explore endless sonic avenues.  There is, though, one key member of this quartet that cannot be overlooked.  The rhythm guitar work of the soft-spoken, seemingly reclusive King Zapata.  It becomes fully evident how important he is to the sound of this band on tracks like the moody, spacey and heavy, “You Saved Me” and the gigantic, distortion-drenched “Numb“.  As much space as Clark’s guitar fills, the absence of Zapata’s presence would absolutely leave a void.

One aspect of Clark’s musical prowess that doesn’t get talked about enough has to be his vocals.  As a child, he sang with his sister in the church choir and that soul is evident in much of his music; no more evident than in his gospel-tinged songs.  “Please Come Home” is one of those that graced the stage in Orlando.  It’s a perfect example of how even HIS solos can be upstaged by that sweet falsetto.

After a blistering 90 minute set, “Churches” was the choice for the 1st encore slot.  Armed only with a guitar, a harmonica and Radelat playing sparingly on the drums, his Dylan-esque singer/songwriter capabilities were in full effect with this spiritual stomp.

The nearly 20 minute encore concluded with the bluesy, hip-hop stylings of “The Healing“, the 1st track off his latest album, “The Story of Sonny Boy Slim”.  With its message of hope and faith thru the power of music, it’s a song that fully encapsulates what Gary Clark Jr. means to this generation of the blues.

Can I Get A Hit

Stuff That Aint For You