Ok, so maybe this headline is a bit hyperbole.  But, for me, I just happened to indulge in this perfect piece of poultry at a time in my life that revisionist history would demonstrate as a major turning point.  It really is hard to believe that it’s been just over a year since I went to this little hole in the wall in Montego Bay three times over the course of four days.  It’s equally hard to believe that after 10-plus years in the TV business, this would be the last production shoot I would be a part of.

In February of 2015, I was a part of the television series shoot entitled “Altered Course” that would air on Golf Channel in the summer of that same year.  It was a reality/competition based series that took place in Montego Bay, Jamaica…and it was extremely unique, to put it mildly.

8 teams of 2 competed in a format where we basically took Speed Golf, extreme sports, and an Amazing Race kind of team camaraderie/tension and shot the whole thing like no one ever had.  With each “course” spanning over multiple golf holes, we had to institute multiple steady-cam operators, two cameras on mobile “Spider Cam” towers, one camera shooting super slo-mo (the Red Epic), approximately 8 field cameras, 20 to 30-ish Sony Action Cams (their answer to the GoPro) and flew two drones during the course of each challenge.  Hell, our host even ran along side our competitors in a fashion in which nobody had ever seen or conceived of before.  Now, this is where I come in…

Prior to this series, my main gig at Golf Channel for the previous 12-years was as Producer of the “Big Break” series.  A mainstay on the programming schedule since it’s inception back in 2003, this one-of-a-kind reality/competition series was where my professional career grew up and became an adult.  The production crew for this (which totaled approximately 80-100) also remained largely intact for over a decade, so we really were one big family.  Naturally, when I was given the opportunity (along with the majority of our “Big Break” crew) to be a part of this new, revolutionary competition series called “Altered Course”, I was extremely excited for the chance to put my mark on what we were hoping would be the next big thing.  My role on the shoot would be as Talent Producer, which means I was in charge of integrating our host (Kristen Kenney) into the mix of the insane concept of “Altered Course”.  So, I decided that to have her truly be part of the competition concept, she needed to run the course along with the teams.  Thankfully, she was more than willing to go along with this idea.  My two cameras, audio, makeup and Production Assistant?  They eventually warmed up to it.

Normally, by the back end of any extended shoot (we filmed “Altered Course” over the course of two weeks), you just need to get off campus, so to speak.  Even if your “home” is a gorgeous resort situated on the white sand beaches of the Caribbean Sea, cabin fever has a tendency to set in.  That and tourists.  So, around day 10, a couple members of my team (dubbed “The A-Team”) decided it was time to take in some of the local culture.

Recommended by our local contacts for a truly authentic Jamaican Jerk Hut, we decided to (unsuccessfully) recruit some of the crew to venture out and try this place called “Scotchies” they spoke so highly of.  The lack of a posse was not gonna deter us.  We needed some local flavor.

Upon arriving, this was most definitely the real deal.  The space was much larger than your typical roadside Jerk Hut, but don’t let that fool you.  This place is legit.  You’re immediately hit with the unique smoky scent of the Pimento and Sweet Wood which is laid over top this massive grill pit that spans the expanse of the entire front area.  In a cooking method that is unique upon itself; they lay the wood on top of the open flames, wait until it begins to smoke, then the Jerk-marinated chicken (or pork) is laid directly on the rows upon rows of wood and covered with corrugated metal panels.  This is the main reason why you’ll never be able to replicate this anywhere but on a roadside in Jamaica.  They source all that Pimento and Sweet Wood from the hills behind the hut and even if you can get your hands on that stuff, you’ve gotta be willing to build one of these specialized grill pits yourself.  Corrugated metal and all.

To the left of the “kitchen” is a tiny window where you place your order.  Along with the chicken and pork they offer a number of customary local sides (Yams, Bammy, Festival, Rice and Peas, just to name a few).  Once you place your order and pay (cash only, FYI), you pass your receipt to one of the guys manning the grill.

Insider Tip #1: Make sure to pass a tip along with your receipt (a couple bucks is fine).  You’ll get a better piece of meat.

My Recommendation/Beer Pairing: 1/2 chicken with Festival, Rice and Peas and either a Red Stripe or Dragon Stout.  I mean, you’re in Jamaica after all. 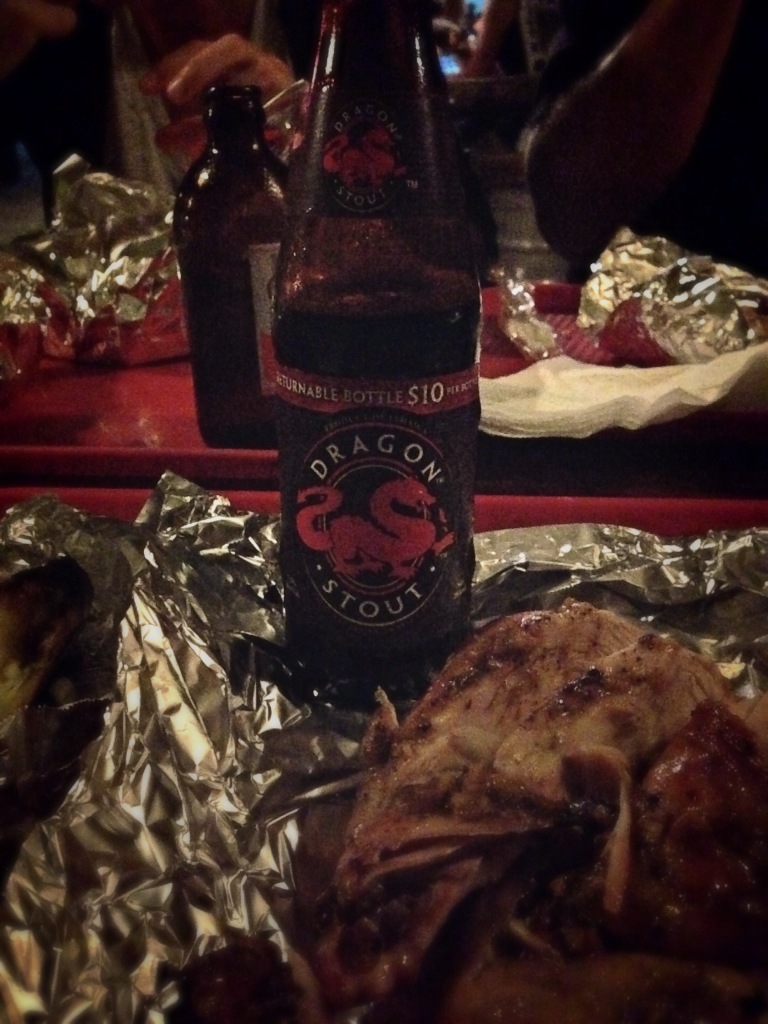 Hang out in the area around the grill and wait for your order to be called up.  If you couldn’t tell by now, this is place is absolutely and wonderfully no frills.  Utensils are plastic, you’ll get your chicken (or pork) wrapped in tin foil and your sides either in styrofoam containers or, you guessed it…tin foil.

The clientele at Scotchies is actually a nearly 50-50 split between locals and tourists (more so on the weekends), which says a lot about the food.  If the locals are down with hanging with the vacationers then this stuff has got to be real-deal.  And let me tell ya…it is.

First off, the atmosphere is exactly what you want when eating a totally authentic piece of Jerk Chicken with a Red Stripe chaser.  Open air, wooden picnic benches, thatched tiki hut awnings.  Again, no frills, but everything you’d ever want.  Secondly, and ultimately, it’s all about the chicken.

I’ve never had, or probably will ever have again, a piece of chicken this good.  It’s one of those meals that you just forget all about your knife and fork and you just go at it with your hands.  Just straight up primal, meat devouring, caveman-style eating vibes.

It had that typical Jerk flavor profile (Allspice, Scotch Bonnet Peppers, Thyme, Ginger, Garlic and a touch of Brown Sugar sweetness to balance out the heat), but what did it for me was how the smoke from the Pimento and Sweet Wood absolutely permeated every bite, but didn’t overpower one bit.  That, along with the slow cooking method used (about 90 min. per chicken) just lent itself to an amazingly tender and juicy piece of chicken.  I literally still get cravings for this.  It’s ridiculous.

Insider Tip #2: The chicken by itself is not over the top spicy, but it does have a kick.  Now, if you’re willing to go totally-local-legit, make sure to drizzle a little (and I stress LITTLE) of their secret recipe, Scotch Bonnet Pepper Sauce onto the chicken while it’s still in the foil.  Drizzle it in there, seal it back up, give it a shake so it works it’s way onto all the chicken, and prepare to have your tastebuds lit the fuck up.  You will sweat.  You will need an extra Red Stripe.  You will love every second of it.

The next day on set, we just couldn’t keep this place from the rest of the crew.  We raved up and down and back and forth about how amazing it was and how everyone should go there with us after we wrapped shooting for the day.  Yes, at 7am, we had already made plans to go there for a second straight night.

This time, we rolled in with a slightly larger posse than the night before.  I ordered the same exact thing and the flavor center of my brain was short circuited just as it was the previous evening.  On this night, we decided to stick around for a bit afterwards and stopped in for a drink at the “Chill Spot”, a tiny little watering hole which resides next to Scotchies.  This place was pretty much exclusively locals and was everything the name suggests.  Totally chill.  I got myself an Appleton’s Rum on the rocks, which I had grown quite accustomed to over the previous two weeks.  When in Jamaica…

The next day was our final shoot day, so Scotchies was off the table for the evening’s festivities.  For those not in TV Production, it’s tradition to have some sort of wrap party at the end of a series shoot (at least it always was for us).  On our shoots, this normally involves a dinner, accompanied by a slide show courtesy of our amazing still photography team (Mark Ashman and Cy Cyr), lots of drinking and then playing guitars around a bonfire until the wee hours of the morning (accompanied by more drinking).

The majority of us did have one more day on the island after we wrapped, so what do ya think we did on our last night… 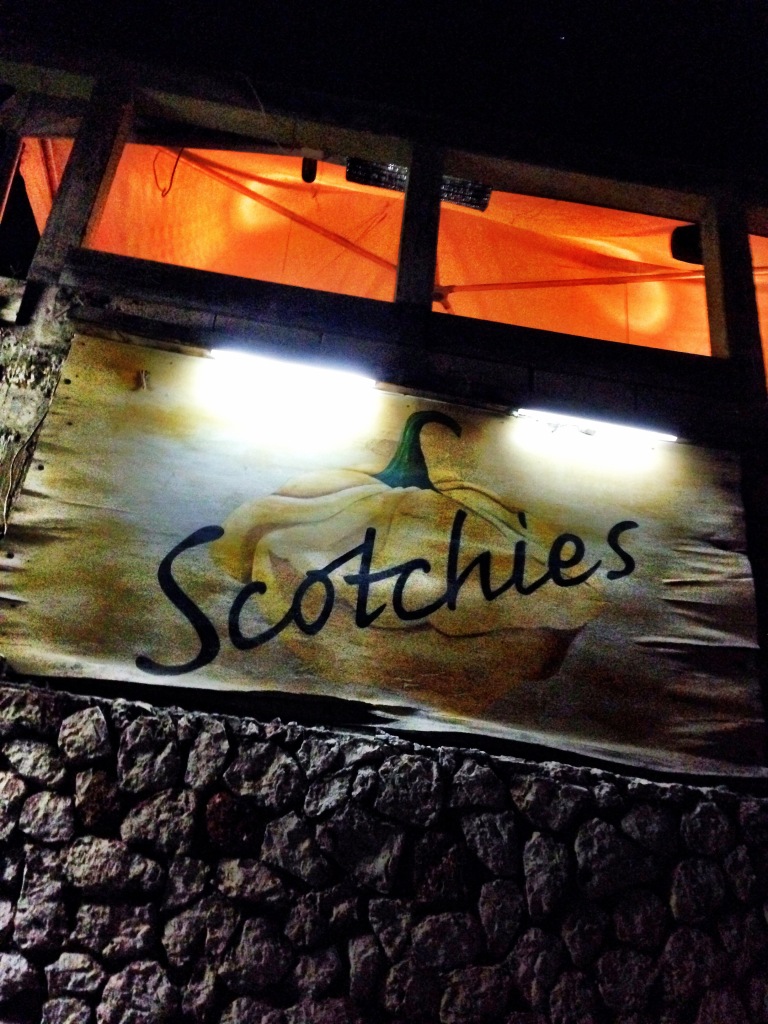 THIS time we rolled in with approximately 15 of us…most of which had yet to have the Scotchies experience.  I, of course, taught everyone the ways of ordering, tipping, etc.  Knowing that this might be the last time I would get the opportunity to experience this amazing culinary creation, I couldn’t force myself to deviate from my previous two orders.  1/2 chicken (with the Scotch Bonnet sauce added), Festival, Rice and Peas and a Red Stripe.  Same as it ever was.

There was a feeling amongst the entire crew that we had captured something special out there in the Jamaican foot hills.  Yeah, the chicken was amazing, but I’m speaking more to the series we had just finished filming.  “Altered Course” was so different and so revolutionary in so many ways (production wise and competition wise) that we figured we’d all be back together again in 2016 at some other amazing locale just trying to top what we had accomplished in Montego Bay.

We thought we were changing how golf could be played and watched.  We thought we were doing something so cutting edge that the world would have no choice but to tune in and marvel at the innovative approach we were taking to not only the game of golf, but to how reality/competition can be captured on camera.  Unfortunately…it was not to be.  Production costs did not warrant a return on the investment of the series, ratings were not what were to be expected and we were all ultimately considered expendable.  Me and my crew would be laid off just a few short months after filming wrapped.

So, the question you ultimately ask yourself after something like this happens is, would I do it all again knowing how it would all end?  Goddamn right I would!  I love my crew.  I miss them all dearly and I feel very lucky to have experienced everything I have over the course of 12-years with that big ol’ family of ours.  And hell, had it not been for the series shoot that completely altered my life, I never would have experienced Scotchies.  Holy crap that chicken is good.

Can I Get A Hit

Stuff That Aint For You